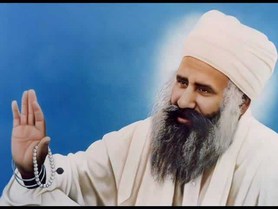 from childhood, served as the most devoted “Gurmukh Sewadar” (personal attendant) of Baba Nand Singh Ji of Nanaksar Kaleran. Baba Ji was born in Jhorara Village, Jagraon in the District of Ludhiana, Punjab, India on 26 March, 1916. His father was Sardar Bagga Singh. Upon birth he was named Bhai Inder Singh but Baba Nand Singh Ji changed it to Isher Singh. He was a very pious and devoted person right from his childhood. It is said that once Baba Nand Singh Ji went to Jhorara Village for three days during summer.

Bhai Inder Singh, then aged 13, was lying on a charpoy (cot) and watching a melon crop in a field. He suddenly heard a mysterious message – “I have come here for your sake and you are going to sleep”. Having heard this, accompanied by his cousin, he decided to pay his respect to Baba Ji. Baba Nand Singh Ji advised him to learn the Gurumukhi script and avoid bad company. He also noted that the name Inder denoted the worldly grandeur and thus unsuitable. Baba Ji later changed it to Isher Singh. Thus Baba Nand Singh ji showered his blessings on his future successor.

Bhai Inder Singh, who was later known as Baba Isher Singh Ji, used to take a very prominent part in free service (“Sewa”) to the public. He had four brothers and each of them was given a quarter kilogram of butter per day by their parents as a reward for harvesting the wheat crop. Bhai Inder Singh used his share for preparing “Parshad” and offering it to Baba Ji. As soon as he had eaten it, he used to feel an extraordinary pleasure and as such he began to devote more time in reciting the “Naam” (Divine word). Further to that, on the advice of Baba Nand Singh Ji, he began to receive his religious education from Sant Wadhawa Singh Ji.

Sewadar”) who was young, pious and of a religious disposition from that village. He further added that the attendant should be a man of firm determination and capable of entertaining the fear and anger of the Master as well as love for him. In fact, the hint was meant for Bhai Inder Singh. Furthermore there was an occasion when Baba Ji had told Bhai Inder Singh’s mother, “You have five sons, why not give one to me?”. At that time Bhai Inder Singh had a big painful sore on his left arm and as such he could not sleep. He prayed for Baba Ji’s blessings and one day Baba Ji appeared in his dream and advised him that if he really wanted true joy and peace he should seek his mother’s permission and come to Nanaksar. The pain subsided and after a few days, the sore too slowly vanished. Bhai Inder Singh related the whole story to his mother who on meeting Baba Ji said, “Oh Master, my son is yours from today”. So Bhai Inder Singh began rendering his services and remained at Nanaksar. Baba Ji directed him to serve him as his personal chief attendant. Thereafter Baba Ji changed his name to Isher Singh as Inder Singh indicated the possession of wealth and “maya”.

Baba Isher Singh Ji was fully committed to the service of Baba Nand Singh Ji. He was attentive at all times and he never slept while on duty. Baba Nand Singh Ji often moved around through thick jungle and it was very difficult for any ordinary person to follow or keep pace with him. Baba Isher Singh never cared for his personal comfort and was ever ready to do whatever that was expected of him. Most of the time he was found barefooted in the service of Baba Ji.

When Baba Nand Singh Ji returned to his heavenly abode in 1943, Baba Isher Singh Ji could not bear the separation and was in great grief for about seven years. He remained at Jhorara Village. His eyes were usually full of tears most of the time. Nanaksar became almost deserted without his master. Initially Baba Isher Singh Ji had no desire to occupy Nanaksar as his Head Quarters. But soon the devotees there began to complain to Baba Ji regarding the misuse of the holy place by selfish and irresponsible people. Further more the sacred system of worship was being ignored and the devotees earnestly requested him to restore the sanctity of the place. Baba Ji, acting on the heavenly message from Baba Nand Singh Ji, moved to Nanaksar together with the devotees. This news soon spread all over and thousands of devotees joined in for free service (“Kar Sewa”). The “Sarowar”, (sacred tank), with the grace of Almighty, was constructed and completed within 28 days. The devotees were extremely happy and celebrated the occasion, after having a bath in the “sarovar”, with the distribution of food.

in the free service (sewa) for the construction of the Nanaksar building. Carpenters, masons, blacksmiths and other
skilled construction workers all offered their services free of charge day and night for this sacred building. The Golden Umbrella at the top is 39 feet in diameter and 13 feet in height. The entire system of worship as prescribed by Baba Nand Singh Ji is being followed. There is no provision for cooking at the Gurdwara Sahib but the food is regularly being brought by the devotees living around the area. There is usually a continuous flow of devotees for “Guru Jis Darshan”. Food and Parshad is served in the “langar” hall. This customary approach still continues today.

Baba Isher Singh Ji also introduced the baptization with sacred Nectar (“Amrit”) as prescribed by Guru Gobind Singh Ji (1666 -1708 A.D.) on a large scale. Further to that, the singing of hymns from the Guru Granth Sahib,

discourses by different eminent singers (“ragis”) and devotees of Baba Ji continued day and night. Besides that Baba Ji visited all the important Sikh religious places in India and conducted religious programmes. The baptization was always a must wherever Baba Ji went. He always emphasized on the importance of “Gurbani” for the true liberation and for overcoming the fear of death. According to Baba Isher Singh Ji, Sri Guru Granth Sahib is the true Guru of the Sikhs and as such they should have absolute faith in it. Among the eminent personalities who sought Baba Isher Singh Ji’s blessings include Dr. Rajinder Parshad, Dr. Rada Krishnan, Presidents of India, Maharaja of Patiala, Maharaja of Faridkot etc.

Baba Ji visited Solan and Shimla in September, 1963 and on the way back to Nanaksar, he spent a night at Panjore Gardens near Chandigarh. He celebrated the last “Purunmashi” (full moon) on a grand scale on the 3 October, 1963. He had hinted on a number of occasions that he would have to leave this world for his heavenly abode soon and on 6 October, 1963, after the “Rehras Sahib” prayers his soul left for his heavenly abode.