This is a modest attempt to give a glimpse of the grand spiritual personality and the most inspiring life style of the great sage of Nanaksar, Kalera Village, Jagraon of Ludhiana District, Punjab (India). As it is impossible for a mortal to narrate the glory of the Eternal, in telling this divine story, sincere apologies are offered for any inadequacies.

A great devotee of Sikhism, Baba Nand Singh Ji was born in 1870 A.D. at Sherpur Village, Jagraon, in Ludhiana District of Punjab. His father was Sardar Jai Singh while his mother was Sardarni Sada Kaur. Right from childhood days, he had an urge for devotion to God. His nature was that of a hermit, a “Yogi” but he had an extra glow on his face. Upon seeing the glow on his face, one could feel that he was a great soul sent by God into this world to deliver the message of Ultimate Truth. At the age of five, he often used to wake up in the middle of the night and go out for meditation. Once his parents on not seeing him in his bed got worried and started looking for him. They were surprised to see him sitting on the edge of the well with his eyes closed and in deep meditation. He was perched precariously and any slight movement due to his sleepiness/drowsiness would have resulted in his falling into the well. Upon seeing the glow on his face and the manner in which he was in deep meditation, the apprehension of the parents disappeared. The whole episode led them to believe that their child was a great soul who would one day become a great saint and who will show the way to Ultimate Truth to the world.
Baba Nand Singh Ji, in his youth, adopted the profession of his fore fathers, but in reality he was deeply devoted to God.

Baba Ji left his house and started to do “sewa” at Gurdwara Sahib in Ferozpur. There he met Sant Baba Harnam Singh Ji, Bhuchon Wale. Sant Ji observed that the young Baba Nand Singh had the characteristics that must have been acquired by long and deep meditation and devotion. He also seemed to possess the spirit of sacrifice and always ready to serve. This made Sant Harnam Singh Ji show the young Sant Baba Nand Singh the way to complete devotion and the correct path to divine knowledge leading to the ultimate Union with God. Sant Ji also made him realise that only that part of the life which was spent in the devotion and service to God was considered successful. He further stressed that one should do good deeds for the welfare of humanity and that the youth age once passed never returns in life while old age never leaves. Therefore youth should not be wasted but one should make the maximum use of it to do service to God and mankind.

further meditation. He commenced his meditation without considering the local weather conditions. Furthermore he did not go anywhere for his food. He believed that He, “Waheguru” on whom he was devoting and meditating, shall definitely take care of all his needs. With this strong belief in mind, he sat in deep meditation. Somehow the food came from one source or other at the required times.

After a period of meditation, he returned from the forest and camped just outside the village and continued with his meditation irrespective of the local climatic conditions. The villagers upon observing this built a temporary house for him. After sometime the people from Kalera Village came and requested him to visit their village. He accepted their invitation and set out for Kalera. On the way he stopped at a well which was between Kaunke Village and Kalera and decided to camp there. The villagers over there made a small hut for Baba Ji and Baba Ji started his meditation.

Baba Nand Singh Ji later established his “Dera” (centre) near Kalera in Punjab. He led a simple life and continued
with the same principles of deep meditation. The food for the “Dera” would come from different devotees though no cooking was done at the “Dera” itself. This practice is still continued by the “Dera” now popularly known as
Nanaksar. The food, “langar”, is not prepared at Nanaksar but it is sent by the nearby villages and no matter how big the congregation, never ever has has there been a shortage. No monetary offerings are ever made in front of the Guru Granth Sahib at Nanaksar, as the usual practice is at other Gurdwaras, but never a shortage of funds has occurred there. Baba Ji did not use any money on himself. He always served the community with true love and affection. It is said that once 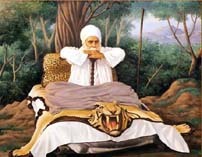 Maharaja Bhupender Singh of Patiala came to offer one lakh rupees for the Gurdwara fund but Baba Ji politely refused the offer. This was the first time someone had ever declined the offer of accepting money for a religious place from a Maharaja and of course the Maharaja felt bad and told Baba Ji, “You will not find a donor like Bhupender Singh”. To this Baba Ji replied, “You
will not find another person who is prepared to sacrifice everything and yet be fully committed like Nand Singh”. This made the Maharaja humble and respectful and he bowed his head before Baba Ji. Baba Ji left for his heavenly abode in 1943 (13 Bhadron Sanmat 2000) at the age of 73. 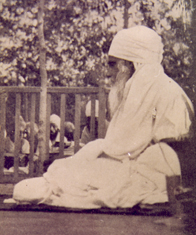 ” Be True Sikh
” Do charity, speak truth and embrace humility
” Emphasized on Naam Simran (Meditation)
” Have faith on Akalpurkh alone
” Choose a charitable cause and pursue it with selfless devotion
” Have Love for all and every one
” Have faith and respect the Holy Body of Sri Guru Granth Sahib as the Living Sikh Guru.
” Praise only Guru Nanak Dev Ji and criticise and condemn only oneself.
” Pray before Guru Granth Sahib only for all blessings and effacing of sufferings.